Melodic Death / Black Metal with folk-influences and lyrics written in three languages (English, German and Russian). Since 2006, the band Craving from Northern Germany combines all these ingredients into a harmonious band-concept.

After two successful own productions (Demo 2006 / Revenge-EP 2008) Craving ultimately release their self-titled debut album on Apostasy Records.
On this first longplayer, which will be released on 20th January 2012, the band presents a mixture of melodic Black- and Death Metal.
Paired with Celtic melodies they offer a wide musical spectrum that always stays interesting. Fans of Wintersun, (early) Ensiferum, (early) Finntroll, Suidakra, Equilibrium and Co. will definitely be satisfied!

The album was recorded in Dortmund at the “Alpha Sound Studios” (In Flames amongst others) in cooperation with Lars Schlüter. Mixing and mastering was done by Sebastian Levermann (“Orden Ogan”). The result is clear and powerful! With Helge Stang (ex-Equilibrium / Arafel) and Sole Genua two mentionable guest musicians contributed to the album.
One special thing about the debut is that the lyrics are written in three different languages (English, German, Russian). 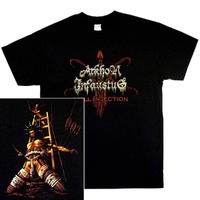