Monumension is the sixth studio album by Norwegian heavy metal band Enslaved. It was released on 27 November 2001, through Osmose Productions. It is Enslaved's first album feature lyrics sung entirely in English, although some versions of the album include the Old Norse track "Sigmundskvadet" as a bonus.

Monumension was the last Enslaved album to feature guitarist R. Kronheim; Arve Isdal would replace him on Below the Lights. 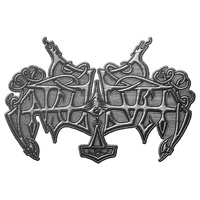