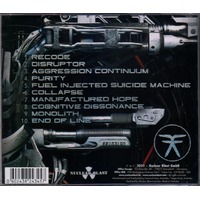 
One can’t overstate the size of the Fear Factory boot print on the neck of heavy metal. Unleashing influential albums with devastating anthems for over 30 years, Fear Factory is widely recognized as both crucial and innovative in extreme metal circles. Fear Factory manufactured, demanufactured, and remanufactured a sound that reverberates across several subgenres. They perfected an explosive blend of staccato paint - stripping riffs, industrial-tinged drums, electronic flourishes, and a scream/sing dichotomy, all of which became staples in heavy music, ever since the group first emerged in L.A.

Fear Factory headline major festivals; earned several awards from the international sales charts; toured with legends like Black Sabbath, Slayer, Iron Maiden, and Metallica; performed at three Ozzfests ; and influenced generations of bands who achieved multiplatinum success. But it’s the group’s commitment to unrelenting extremity and creative authenticity which ensured its place in heavy metal history, from the touchstone masterpiece Demanufacture to the similarly dominating Genexus.

Fear Factory records are cinematic in scope; sonic landscapes, echoing the dystopian post-apocalyptic futures found in classic sci-fi literature and films, from Ray Bradbury to Blade Runner. Aggression Continuum, the tenth studio album, is the culmination of three decades of unforgettable songs, performances, and forward - thinking storytelling concepts, while simultaneously rebooting Fear Factory onto a brilliant and excitingly unpredictable new path. Like the liquid metal T - 1000 in the Terminator franchise or the Academy-Award-winning reboot of Mad Max, Aggression Continuum is a turning point where what “was” transforms into what will be. It’s Fear Factory’s own Fury Road. 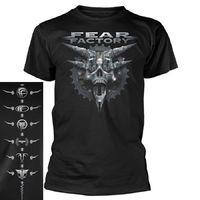