GEORGE KOLLIAS has firmly established a well-earned reputation as a world-class drummer. His exceptional work with death metal legends NILE as well as heavily frequented percussion clinics around the globe and guest contributions have cemented George's status as a rare progeny with the sticks. Yet there is far more to the Greek musician than "just" drumming. 'Invictus', his debut solo album, proves that GEORGE KOLLIAS also exceeds on performing with all other instruments from the rock and metal spectrum. Tracks such as "Shall Rise / Shall Be Dead", "The Passage", and "Treasures of Nemesis" unleash a crushing death metal assault. His own exceptional work across all instruments is enriched by guest spots from members of established genre titans such as NILE, ROTTING CHRIST, FIREWIND and others.

Far more than just a solo album vanity piece, 'Invictus' delivers classic, timeless death metal. "This solo project contains exactly what the word 'solo' describes: one musician writing all music and lyrics as well as performing all the instruments", states KOLLIAS. "I can honestly say the only reason I have recorded this album is the fans asked for this to happen. I am happy that I did it and more excited than ever for the future of this project! I enjoyed recording it more than anything. I also had to pleasure to have some really important guests, which made this album even more special to me."

Recommended if you like: Nile, Rotting Christ, Hate Eternal Nile What One Worships One Becomes Shirt 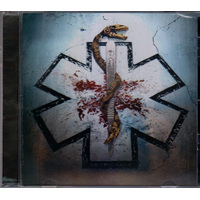