ILIUM is a melodic metal band formed in Newcastle, Australia, and is influenced by traditional and early power metal acts. Many members are members or were former members of the band ORACLE and thus, they transitioned their tracks from their old songs to a more melodic style. Their new album, “Carcinogeist” features intense symphonic and thematic songs. It’s a good medley of old and new influences and the album, for fans of heavily synthesized power metal, holds up.

Free postage anywhere in Australia on this item. 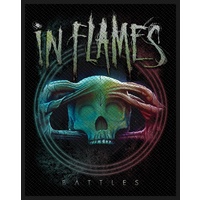