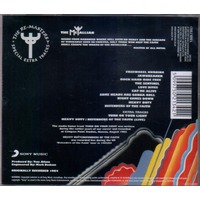 
Defenders of the Faith is the ninth studio album by English heavy metal band Judas Priest, released on 4 January 1984 by Columbia Records. The album was certified platinum by the RIAA, and spawned the singles "Freewheel Burning", "Some Heads Are Gonna Roll", and "Love Bites".

Defenders of the Faith was recorded at Ibiza Sound Studios, Ibiza, Spain, and mixed from September to November 1983 at DB Recording Studios and Bayshore Recording Studios in Coconut Grove, Miami, Florida. The LP and cassette tape were released on 4 January 1984, and the album appeared on CD in July. A remastered CD was released in May 2001. Simultaneously with the album's release, the band kicked off their tour in Europe, with the bulk of concerts taking place in North America during the spring and summer.

Stylistically, Defenders of the Faith did not greatly depart from its predecessor and featured a similar formula of short, up-tempo metal anthems with stadium shout-along choruses, although progressive elements returned on some tracks such as "The Sentinel". The track "Rock Hard Ride Free" is actually a re-working of a track entitled "Fight for Your Life", recorded during the 1982 Screaming For Vengeance sessions but not included on that album.

The album was an immediate success, only going one spot below Screaming for Vengeance on the US Billboard 100 Albums Chart. Some critics nonetheless objected to the lack of a standout single comparable to "Breaking the Law" or "You've Got Another Thing Comin', and the album's general similarity to Screaming for Vengeance.

The 30th-anniversary release of the album (released in March 2015) came with a double CD of a live show recorded on 5 May 1984 at the Long Beach Arena in Long Beach, California on their Defenders of the Faith Tour and was originally recorded for a radio broadcast.

Bonus Tracks
11. Turn On Your Light
12. Heavy Duty / Defenders Of The Faith (Live)