There is an old sanatorium up in the hills of Northern Italy. An old, abandoned, and decayed fortress whose corridors are filled with the ghosts of a thousand tortured minds and souls. A place where every wall still bares the scars of countless damaged lives… Welcome to the LACUNA COIL Sanatorium! With their 8th studio album the Italian Gothfathers decided it was time to up the ante, switch into a heavy mode and finally take full creative control over every aspect of “Delirium”. They created an audio-visual setting that is allowing for flashing glimpses of a dark place that will take their listeners on an entrancing trip.

Lacuna Coil say in their very own synopsis of “Delirium”: “’Delirium’ is about the horrors that we must face in everyday life by exploring the unknown, and to one day, hopefully find the cure.” Musically, the concept transforms into heavier, grittier riffing and richer contrasts concerning the interplay of Cristina Scabbia’s unique, beautiful vocals (check the balladesque “Downfall”, which also features a great solo by Myles Kennedy / Alter Bridge) and Andrea Ferro, whose brutal shouts verge into death metallic territory on songs like “The House Of Shame” or “Ghost In The Mist”.

After already being heavily involved with previous productions, Marco "Maki" Coti-Zelati took over the leading role as producer together with his fellow bandmates and created the artwork for “Delirium” himself, based on an atmospheric session captured by Italian photographer Alessandro Olgiati. Overall, “Delirium” is not only a well-thought-out band effort, it might quickly become one of the band’s most applauded albums ever, a real gothic metal highlight! Exodus Blood In Blood Out CD 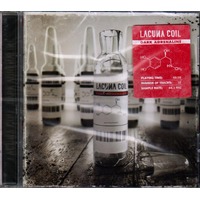