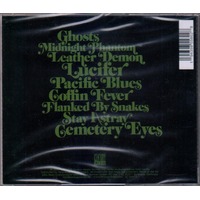 
Naming their first two albums Lucifer and Lucifer II didn’t suggest that Swedish retro-rock gang Lucifer are a band with a penchant for wild experimentation. Fittingly, there are few shocks on Lucifer III, but there is a wealth of style, some great songs, and pure rock DNA. Lucifer did swing things about a bit between those first two albums, along with most of their line-up, but the core sound remains resolutely locked in the ‘70s.

With vocalist Johanna Sadonis and The Hellacopters’ Nicke Andersson now established as the creative heart, this leans towards the pop-tinged hard rock of the band’s second album, rather than the doomier strokes of the first. Opener Ghosts starts on a great hooky riff and a tastefully restrained howl of guitar that could have come from Ghost (the band), before Midnight Phantom rides in on some satisfyingly metallic guitars and a huge groove.

There are occult shenanigans at play, but it’s more Hammer Horror dress-up than serious evil, and the whole album is a bundle of spooky, crushed velvet-clad fun.

Recommended if you like: Avatarium, Purson, The Oath, Witchcraft, Kadavar, Coven, Graveyard, Uncle Acid & The Deadbeats