Gore fueled death metallers Pathology return with their 11th studio album The Everlasting Plague. Originally a song title from a previous album, the band “thought it was fitting as [they] wrote the album during a global pandemic that never seemed to end,” explained founder and drummer Dave Astor. “It also pertains to the general ills of the human condition, and that’s what the songs are about. The themes on this album range from death rituals to premeditated murder, to torture and addiction.”

“I think all the tracks on this album stand out,” says Flett. “We went all out on this one. We added some new elements to our music that give certain songs a different, fresh feel. This album is definitely an awesome journey from start to finish.” Recently signed to Nuclear Blast Records, PATHOLOGY are charged with a violent hunger to return to the road, and unleash their latest monstrous music to the masses. . 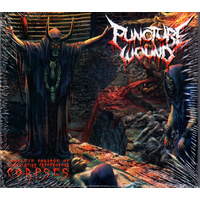 Necrophobic Dawn Of The Damned CD