Outstanding Heavy Metal Rock from Stockholm, Sweden! With their self-titled debut album and an untameable will to power, Sweden’s hopefuls THE DAGGER are conquering the throne of rock! By melting influences from traditional heavy metal, hard rock and classic rock THE DAGGER continue in the style of the debut 7” (released as Dagger) offering amazing melodic yet heavy sounds inspired by Iron Maiden, Deep Purple, Judas Priest or Rainbow. Produced by Fred Estby (Dismember, Morbus Chron, Carnage) and recorded at Gutterview Recorders, the studio of Nicke Andersson (Entombed, The Hellacopters, Imperial State Electric) and Fred Estby. With guest appearances of Nicke Andersson and Robert Pehrsson (Robert Pehrsson’s Humbucker). The CD version includes a cover version of the classic track “Mainline Riders” by the UK metal legend QUARTZ as bonus.

The Dagger was formed in formed in 2009 by Fred Estby, David Blomqvist, Tobias Cristiansson and Tyrant, who are or have previously been involved in bands such as Dismember, Grave or Necronaut. After auditioning several possible singers and seeing Tyrant exiting the band, Jani Kataja (Mangrove, Sideburn) joined the fold as vocalist by the end of 2012.

While there certainly was a revival of 70’s rock and traditional 80’s metal in recent years, THE DAGGER thought many acts around lacked the right feeling and sound, so they set out to create real classic hard rock / heavy metal rooted in blues rock and perform it simply the way they like to hear it themselves. THE DAGGER stands for eagerly rehearsing, jamming, recording live and writing songs as a unit resulting in an authentic and captivating approach.


Your vinyl will be mailed to you in sturdy LP mailer box. 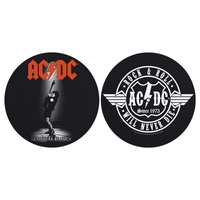