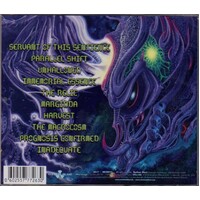 
Ultu Ulla is the fourth studio album by American Bay Area deathcore band Rings of Saturn. It was released on July 28, 2017 through Nuclear Blast. It is their only full-length release with drummer Aaron Stechauner and guitarist Miles Dimitri Baker. Mark Cooper of Mind Rape Art was responsible for the album artwork, as he was on the band's prior releases. The album was produced, mixed, and mastered by Brette Ciamarra at Studio 344 in Pittsburgh, Pennsylvania, Ciamarra had previously produced Lugal Ki En for the band. The album debuted at #76 on the Billboard 200 chart, making it the band's highest debut to date.

Recommended if you like: Thy Art Is Murder, Infant Annihilator, Archspire, Obscura, Whitechapel, The Faceless, Necrophagist, Arcania.