"The War To End All Wars" is the tenth album from Swedish power metal band Sabaton!


Since their debut album in 2005, Sabaton have become a major force in heavy metal. As on the previous album "The Great War" (2019), the band chronicles in eleven brand new songs the atrocities, wonders and events associated with World War I in the early 20th century. With fiery riffs, pounding drums and singer Joakim Brodén's distinctive baritone, each of the songs on "The War To End All Wars" highlights fates and stories from this historical episode, the courage and bravery of individuals, and both triumphs and tragedies. 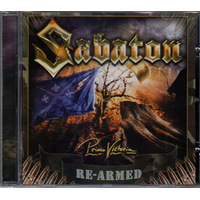