s The Plague Within Death CD The Plague Within Death CD


The Plague hail from Sydney, Australia and there must be something in the water down under, because they rumble with HM-2 glory like their Earth Rot brethren from the opposite coast. Thick, thick riffs are on display for almost all 33 minutes of the band’s debut, making Within Death an easily repeatable beatdown.

The Plague hang close to the Entombed end of the Entombed/Dismember Swedeath Spectrum™ and they steer towards that Black Breath sound thanks to some immense crossover grooves and the hardcore shouts of Mike Ryan. He gives an absolutely virulent performance throughout Within Death, staying in the lower register the majority of the time, but also including demented shrieks like those found at the end of the embedded track, “Hand of Greed.” The track is relentless and feels like getting caught between two colliding wrecking balls. 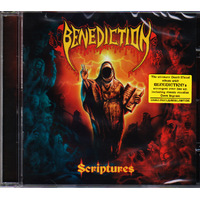 Nile What Should Not Be Unearthed CD Sufferance For The Madness Beyond CD