"Twilight Force carry out their third quest thanks to their symphonic, full-strength power metal full of epic melodies and fast songs. The new singer Alessandro Conti has further raised the level of these new mythological hymns" - Rock Hard

Lo and behold: The Dawn Of The Dragonstar is here! Three years after their spellbinding quest aptly called Heroes Of Mighty Magic, the epic metal brotherhood Twilight Force unleash their most ambitious, most epic and most daring adventure yet. Sharpen your blades, brew your potions, mend your shields and brace yourselves: A storm is coming. And this time, it will leave no stone unturned.

Precise as a flying arrow, ringing as a victorious sword, thundering like a galloping steed, entrancing like a magician’s most potent spell and roaring like a fiery dragon: Dawn Of The Dragonstar is the hymn these heroes deserve and will make you ask “Mano-who?”. Roll your dices, bring your lembas, fill your horns: Twilight Force is back! 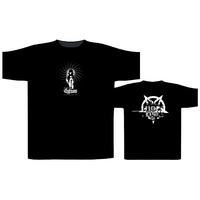