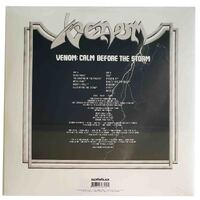 Venom Calm Before The Storm LP


"Calm Before the Storm" is the fifth album by black metal pioneers Venom.

Originally released in 1987, the album is characterised by a "cleaner", more synthetic sound when compared to Venom's earlier albums. Perhaps mostly due to the addition of another guitarist and the producer Nick Tauber, who had previously worked with hard rock acts such as UFO and Thin Lizzy. The band drifted away from the oldschool Venom sound, in favour of a more upbeat traditional and simplistic thrash metal approach. Gone are the pentagrams, inverted crosses and satanic lyrics. This is one of the most atmospheric albums that Venom ever made.

Track Listing:
SIDE A
1.Black Xmas
2.The Chanting Of The Priests
3.Metal Punk
4.Under A Spell
5.Calm Before The Storm