Zenith was formed in January 1984 by Andy Sayers (Guitar & Vocals) and Cliff Evans (Guitar) joined by Haydon Palmer on Bass and Ben Graves (Drums), Andrew Jamieson joined the band on bass in 1985, followed by Keith Townsend on drums. In 1986 they recorded a 3-track single/EP containing the songs “Heavy Heart”, “Death by Misadventure” and “Not Guilty” recorded at Horizon Studios Weston-super-Mare. The band stopped at 1987. All the bands career featuring the cassette album , single and many unreleased songs are featured in this cd. This is an excellent piece of music. DO Not miss it. 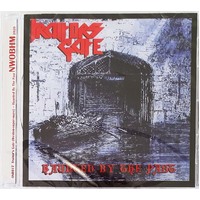 Traitors Gate Haunted By The Past CD