Hail Viking death metal warriors let Odin’s valkyries lead you to Asgard and the hallowed halls of Amon Amarth merchandise Valhalla! Heavy Metal Merchant is your source for official Amon Amarth merch where a horde of rock clothing and merchandise awaits including band t-shirts, patches, hoodies, poster flags, keychains, wristbands, badges, beanies, bandanas, gloves, dog tags, vinyl slipmats and baby clothes for the die-hard thunder god and those searching for the perfect gift for the metal fan. May our Amon Amarth band merchandise store be your passage to triumph!

Amon Amarth is a Swedish melodic death metal band who take their name from a volcano in J. R. R. Tolkien′s Middle-earth. The band's music style is often referred to as Viking metal due to the imagery featured on their CD and vinyl artwork, their live concerts bring a Viking battleship to the stage and their lyrical content is centred in Norse mythology, epic tales of battles, the Viking Age, and the pre-Christian world. Amon Amarth has released ten albums some of them victoriously cracking the top ten in Sweden and recent releases have made very strong dents in the US Billboard charts. Amon Amarth albums in order of release are Sorrow Throughout the Nine Worlds (EP) (1996), Once Sent from the Golden Hall (1998), The Avenger (1999), The Crusher (2001), Versus the World (2002), Fate of Norns (2004), With Oden on Our Side (2006), Twilight of the Thunder God (2008), Surtur Rising (2011), Deceiver of the Gods (2013), Jomsviking (2016), Beserker (2019), The Great Heathen Army (2022). 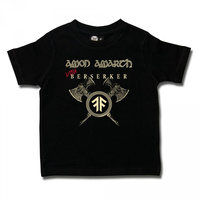 Amon Amarth One Against All Bandana