Browse our range for official Korpiklaani band merchandise! If you are looking for Korpiklanni t-shirts, Korpiklanni patches, Korpiklanni hoodies, Korpiklaani poster flags, Korpiklanni guitar pick sets, Korpiklaani wristbands and more then you have come to the right place! Korpiklaani is a folk metal band from Finland, the name is Finnish for The Backwoods Clan, korpi meaning dark forest. What makes the band unusual in this genre is that they were originally a folk band before turning metal, Their song lyrics are often related to alcohol and partying and on the earlier albums their songs were mostly sung in English but more recent releases have seen a shift to mostly Finnish lyrics. The band has collaborated with fellow Finnish folk metal band Finntroll, Amu Ruotsalainen of Finntroll provided session drums for their debut album Spirit of the Forest and Järvelä provided the yoiking for the title track of Finntroll's album Jaktens Tid. Korpiklaani A Man With A Plan Patch Korpiklaani A Man With A Plan Shirt 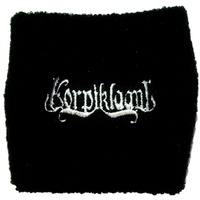