Ghost also known as Ghost BC were formed in Sweden in 2006 and incorporate elements of hard rock, doom metal, progressive and occult rock of the 70s fused with metal influences from the likes of Judas Priest, Black Sabbath and Pentagram. Ghost band member This Nameless Ghoul has described their sound as being like a mix in between Pop and death metal. The band has a very unique visual identity in the form of its anonymity with band members not revealing their names and wearing identical masks referring to themselves as Nameless Ghouls with the vocalist going under the moniker of Papa Emeritus who serves as the bands Satanic Priest mascot character, to date there have been four different characters taking the name Papa Emeritus. Ghost have built a mythology similar to that of a Satan-worshipping Roman Catholic Church a theme characterised in the band's music videos.

If you are a fan or gift buyer searching for a Ghost t shirt, Ghost poster, Ghost patch or Ghost hoodie for the rock music fan or metal head then you will enjoy browsing our range of official Ghost band merchandise. 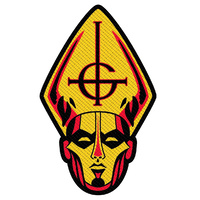 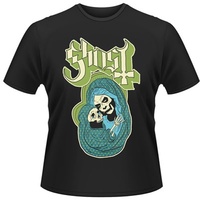 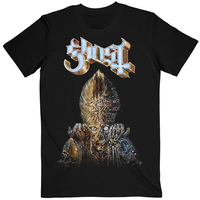