Shop our range of official Kreator shirts and band merchandise. Kreator is a long-standing German metal band and considered one of the big four of Teutonic thrash metal bands alongside Destruction, Sodom and Tankard. Kreator has experimented with their sound including technicality, industrial metal, gothic and speed metal elements, they are often cited as a pioneer of extreme metal and influence and inspiration of death and black metal bands. The band has achieved worldwide sales of over two million units for combined sales of all their albums, making them one of the best-selling German thrash metal bands of all time. If you are looking for Kreator t-shirts, Kreator Hoodies, Kreator patches, Kreator posters, Kreator beanies, Kreator badges, Kreator gloves, Kreator keychains or even Kreator baby clothes for the mini metal head then you will enjoy browsing our range of official Kreator merchandise. Kreator Enemy Of God Back Patch 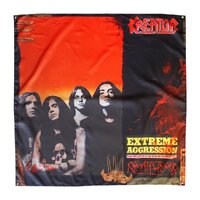 Kreator Pleasure To Kill Back Patch 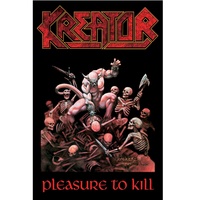