ACCEPT ARE BACK! The German kingpins of heavy metal will release their new, eagerly-awaited studio album via Nuclear Blast on January 15th 2021. The ingenious title of the masterpiece is “Too Mean To Die”.

Special circumstances often lead to very special albums. This is certainly true for “Too Mean To Die”, which of course alludes to the Corona period, although in a different way than one might assume. The title track is a classic Accept cracker: dynamic and unwavering, turned up to eleven! 'Zombie Apocalypse', also relentless and hard, strikes the same note in the band’s signature style. The first single - which will be released on October 2nd 2020 together with a remarkable video - is different. Titled ‘The Undertaker’, its a terrific midtempo number with great vocals and a built-in character that chugs along – certain to deliver some memorable live moments! According to Wolf Hoffmann its one of the most catchy, pleasing pieces of the album. Just how varied the ACCEPT guitar trio performs on the new album is proven by one of the secret highlights: ‘The Best Is Yet To Come’ – a beguiling ballad in which Mark Tornillo is at his best. The metal world knows that Mark can scream like no other, but here it shows once again that the frontman can also sing magnificently.

There’s no doubt that with “Too Mean To Die” Accept are once again playing at the top of the Champions League of the genre. Wolf Hoffmann & Co. present the (music) world eleven masterpieces at the beginning of 2021 - eleven songs for eternity! Accept Balls To The Wall Shirt 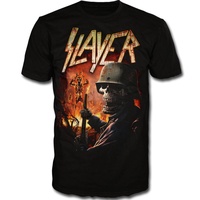