s Arabs In Aspic Far Out In Aradabia CD Arabs In Aspic Far Out In Aradabia CD


Hailing from Trondheim in Norway, Arabs in Aspic has been mid-Norway’s flagship of 70s inspired progressive rock and proto-hardrock for the past 15 years. They’ve been described as a sweet mixture of loud, heavy guitars and drums, 12 string acoustics, funky bass and percussion, screaming Hammond organs, soft Rhodes, Mellotrons and 70s Synths, topped with plentiful vocal harmonies.

The second release from Arabs in Aspic was “Far Out in Aradabia”, which was released in 2004 on CD only. In their humble start, the band can be described as a mixture of the psychedelic space rock akin to Hawkwind and the heaviness and darkness of early Black Sabbath. However, the songwriting was beginning to become bolder and more adventurous, and they even enlisted a keyboard player. The musical inspirations became broader as well, and here they really started venturing into the land of progressive rock. The last track was a studio jam where they played for 65 minutes and edited it down to 19 minutes. This was also the first album they used Julia Proszowzka to do the artwork, who they’ve worked with ever since. 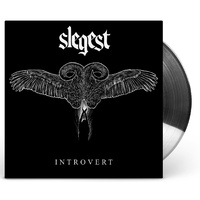