Shop our range of official Andy Black t-shirts and merchandise. Andy Black formerly known as Andy Sixx is the singer and founder of the American glam metal rock band Black Veil Brides. Andy Black released his debut solo album the Shadow Side in 2016. Albums Andy Black has appeared on include we Stich These Wounds (2010), Set The World on Fire (2011), Wretched And Divine: The Story of The Wild Ones (2013), Black Veil Brides (2014), Shadow Side (Solo) (2016) , Vale (2018). 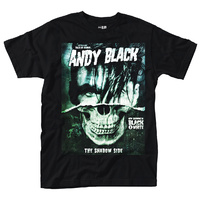 Andy Black The Shadow Side Shirt