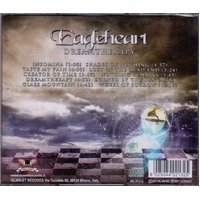 
If Czech band Eagleheart's intent was to turn the knobs to 11 on their sophomore release, Dream Therapy, they have certainly succeeded. Recruiting Roland Grapow (Masterplan, ex-Helloween) to produce, they band pumps of the volume with an album that can only be described as heavy, fast, and generally intense. Did I say fast? This isn't just melodic power metal. Check your radar guns because there's some serious speed (metal) here, too.

Track Listing:
1. Insomnia
2. Shades Of Nothing
3. Taste My Pain
4. Lost In The Dead End
5. Creator Of Time
6. Nothing Remains
7. Dreamtherapy
8. Burned By The Sun
9. Glass Mountain
10. Wheel Of Sorrow