A concept album inspired by the novel Seventh Son by Orson Scott Card, the record incorporates elements of progressive rock, seen in the length and complex structure of the title track. It was also the first Iron Maiden album to feature keyboards, after the band had introduced non-keyboard synth effects on their previous LP, Somewhere in Time (1986).

Track Listing:
1. Moonchild
2. Infinite Dreams
3. Can I Play With Madness
4. The Evil That Men Do
5. Seventh Son Of A Seventh Son
6. The Prophecy
7. The Clairvoyant
8. Only The Good Die Young 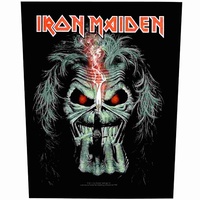 Iron Maiden Can I Play With Madness Patch