Idiosyncrasy is the ninth album from the Italian blackened death thrashers Necrodeath,


“Idiosyncrasy” isn’t an album like their first three-four releases, but can stand out as an opposite to them. “Idiosyncrasy” is different, more atmospheric and of course we have the riffs and solos which will remind you the first releases of SLAYER. There you have Thrash-laden riffs mixed excellently with POSSESSED and VENOM’s Black Metal components. Every track is characterized by pure Thrash and among the diabolical riffing parts you can listen to some progressive themes like in the fourth track. The second track reminds that NECRODEATH are still chaotic, the riffing section is kicking asses. Fifth track presents the occult and morbid atmosphere as those take form by great vocals and tidy guitar playing. Adding the rest of the tracks, the result is magnificent. After all these years, NECRODEATH haven’t run off ideas even while being separated from the maze. 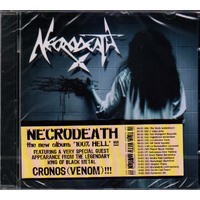 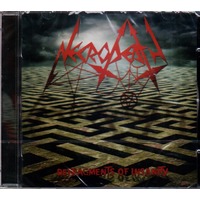 Necrodeath Mater Of All Evil CD