s Rage Against The Machine The Battle For Los Angeles CD 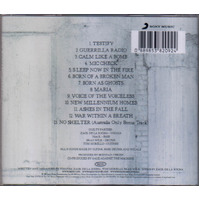 Rage Against The Machine The Battle For Los Angeles CD


The Battle of Los Angeles is the third studio album by the American rock band Rage Against the Machine.

It was nominated for Best Rock Album, and the song "Guerrilla Radio" won the award for Best Hard Rock Performance. In their year-end lists, Time and Rolling Stone magazines both named the album the best of 1999.

The album has been certified double platinum by the Recording Industry Association of America, indicating sales of at least two million units. It would be the last full-length studio album of original material released by the band before their first breakup in 2000 (their next album consisted of entirely of covers and was released after the breakup). Rage Against The Machine Renegades CD