Underground icon, extreme metal trailblazer, third world warrior, and leader of a diverse and dedicated tribe, Max Cavalera not only survives but thrives, blasting out riff after killer riff. The same voice, body, and spirit which launched Soulfly in 1997 summons impossibly heavy noise to this day, throwing down ten slabs of monstrous music on Soulfly’s twelfth album, 2022’s Totem.

Among the most prolific musicians in the genre’s history, Max led Sepultura from Brazil to the world stage, making fans out of Ozzy Osbourne, Deftones, and Dave Grohl along the way. He cofounded Nailbomb, Cavalera Conspiracy, Go Ahead And Die, and Killer Be Killed, issuing album after album to spirited acclaim from critics and fans. But no project is as singularly identified with Max as Soulfly, whose gold - selling self-titled debut arrived with unrivalled determination and spirit. 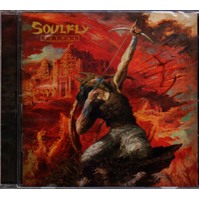