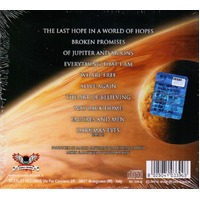 Of Jupiter And Moons is the fourth album from the Italian melodic metal band Temperance.


Temperance is one of the most acclaimed new melodic Metal bands surfaced in Europe in recent years. With three vocalists in their ranks, Temperance’s music stands out for this twist of harmonies, both on their studio albums and during their live shows, which also feature an abundance of sharp, heavy guitar riffs, electronics and even rock influences.

With three accomplished releases – 2014’s self-titled album, 2015’s ‘Limitless’ and 2016’s ‘The Earth Embraces Us All’, the band is ready to conquer the world. Temperance is already known as a heavy touring band: they played more than 150 shows in 3 years, including a U.S. Tour, a full support tour with Luca Turilli’s Rhapsody, a Japanese tour, a headlining European tour in 2017, a special theatre show with a choir and a string quartet (where the ‘Maschere’ DVD, released in 2017, was recorded) and support shows for Nightwish, Slipknot, Within Temptation and more!

‘Of Jupiter And Moons’ is the latest album for Temperance, a further step forward in their career, which will blow your minds away. Mixed and Mastered by Jacob Hansen (Volbeat, Epica, Amaranthe), with cover artwork by Yann Souetre (Ayreon) and band photos by Tim Tronckoe (Nightwish, Ghost), Temperance are back with their stronger work to date. Beast In Black From Hell With Love CD