It is the band's first album with Nuclear Blast Records. The band describes the album as a step up from their debut in every way, most notably in the increased use of symphonic, orchestral, and operatic elements in their songs.

Elements of Heroes of Might and Magic had been laid out for years — even before the band's first record. The lore of the characters, world, and stories within the album was all the work of Blackwald, who is also one of the primary songwriters and lyricists. Initially, the album was a loose collection of songs that Lynd and Blackwald had written several years before Heroes of Mighty Magic's release, some even dating back before Tales of Ancient Prophecies release. As the tracks came together and the writing was nearing completion, the band set out to create something they could look back on in several years and be proud of.

The band was inspired heavily by fantasy novels and video games, such as the works of J.R.R. Tolkien and Isaac Asimov. Most notably, the album lends its namesake to the video game series Heroes of Might and Magic, though Blackwald and Lynd have noted the influence of other fantasy video games as well, such as World of Warcraft.

Track Listing:
1. Battle Of Arcane Might
2. Powerwind
3. Guardian Of The Seas
4. Flight Of The Sapphire Dragon
5. There And Back Again
6. Riders Of The Dawn
7. Keepers Of Fate
8. Rise Of A Hero
9. To The Stars
10. Heroes Of Mighty Magic
11. Epilogue
12. Knights Of Twilight's Might 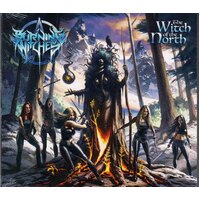