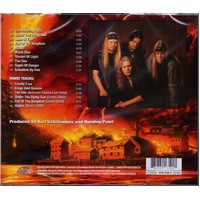 
The volcano rumbles and erupts with deafening thunder into sky-high fountains of fire: With their debut album Salvation By Fire the Finnish metal band Burning Point set free a measure of energy that is usually found in the most spectacular of Mother Nature's free shows. The four musicians cleverly combine kick-down guitar riffs with memorable vocals, culminating in exciting choruses which grab the listener from the first note onwards. Warning: Heavy metal is being forged using the highest of volcanic heat.

The musical style of Salvation By Fire ranges from fast speed metal compositions, like the opener "Under The Dying Sun" and "Signs Of Danger", over grooving mid-tempo songs such as "Finally Free" and "The One", to epic and intelligently arranged tracks like the 6-minute long "Salvation By Fire". Burning Point describes their style as "classical heavy metal" and audibly orientate themselves on great names such as Accept, Judas Priest, Black Sabbath and Malmsteen, yet still manage to put a very individual stamp on the entire album. 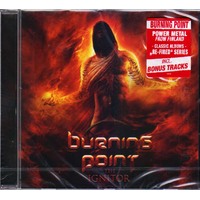