Damnation Defaced Invader From Beyond CD


Since their foundation in 2006, Damnation Defaced have always typified groovy and rhythmically experienced death metal, which never forgets the brutality and the trademarks of the genre besides all its melodies. Their third album continues fine-tuning their profile and highlighting their recognizably more than ever.

As there were already bits and pieces of science fiction appearing on the predecessors, “Invader From Beyond” shows the band integrating this value clearly audible into their sound. Thus, it receives a spherical and futuristic character. Every spin of the album reveals new nuances because of its loads of details. Contrary to other bands with extensive concepts, the plausible song-structures, the catchy verses and thrilling choruses are at the forefront of Damnation Defaced’s writing. This allows the songs to stand strong independently.

Together with David Hambach (Epitome, Display, Tachion) the band evolved their sound pattern. He is responsible for synths, soundscapes and electronic parts, which creates the sci-fi character. This fruitful collaboration with a longtime friend is just the beginning of musical experiments in the future that will drive this concept even further.

”Invader From Beyond“ was recorded by Hannes Huke in the „Institut fuer Klangforschung“ in Hanover, whereas the mix and master was entrusted to the proven hands of Dan Swanö. With this team, a long-lasting dream came true, since Swanö is not only an institution within the death metal scene. He is also well-known for his progressive sound experiments.

The cover artwork was done by Juanjo Castellano (Vomitory, Revel In Flesh), who perfectly realized the graphical vision. He deliberately avoided colors but used shades of grey, which sets another aspect for Damnation Defaced to stand out.

Recommended if you like: Hypocrisy, Scar Symmetry, early In Flames, Arch Enemy, Soilwork 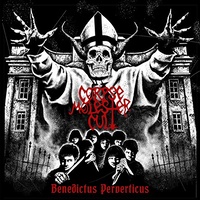