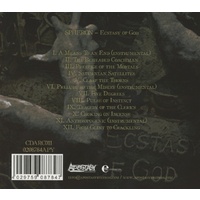 Already with their 2010 self-released EP “To Dissect Paper” the young band from Ludwigshafen has not only ensured nationally for open ears and mouths. With their debut “Ecstasy Of God” Spheron show now 3 years later how technical death metal is presented impressively without letting miss the necessary atmosphere.

This challenging and absorbing album was produced together with Christoph Brandes at the Iguana Studios (e.g. Necrophagist, Deadborn, Imperium Dekadenz …). The breathtaking cover artwork was painted by the famous artist Eliran Kantor who has already worked with bands like Testament, Hatebreed, Sodom and Atheist.

“For me ‘Ecstasy of God’ is one of the tech-Death Highlights in 2013! SPHERON are one of the most promising newcomer of the German death metal scene!“
Steffen Kummerer, Obscura / Thulcandra

Track Listing:
01. A Means To An End
02. The Beheaded Coachman
03. Prestige Of The Mortals
04. Saturnian Satellites
05. Clasp The Thorns
06. Prelude To The Misery
07. Five Degrees
08. Pulse Of Instinct
09. Tragedy Of The Clerics
10. Choking On Incense
11. Anthropogenic
12. From Glint To Crackling