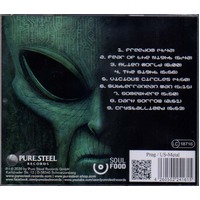 
"Alien Factor" is the first release from Dark Arena. The US Metalheads around the exceptional guitarist Paul Konjicija (also ANTITHESIS), who unfortunately left us last year, made his debut with this work in 2006. At the time, Chris Thomas played bass and Emery Ceo was on drums. Dark Arena's singer was none other than Juan Ricardo (RITUAL, SUNLESS SKY, WRETCH).

Juan Ricardo sang "Alien Factor" exactly in the style of old RITUAL. A fact that was favoured by the song material. The US metal riffing was also enveloped by a slight keyboard note by Rhiannon Wisniewski. "Alien Factor" is simply a masterpiece of US-Metal from the first decade of the new millennium