French power metal band DarkTribe formed in 2009 and recorded their first EP, "Natural Defender" that same year. The band quickly evolved into a powerful live act and in 2012 they released their debut album, "Mysticeti Victoria" on Massacre Records. More touring followed with the likes of Girlschool, Crucified Barbara, Killers, Lacrimas Profundere, Nightmare and many other international acts. In 2015 DarkTribe entered the studio to record their second album, "The Modern Age", which was mixed and mastered at Hansen Studios in Denmark by Jacob Hansen (Volbeat, Epica, Doro, Primal Fear).

The album displayed a mature and confident band, still influenced by everything melodic in metal, but with a very personal approach, multilayered songwriting and brilliant musicianship. And now it's time for album #3, called "Voici L'Homme".

Track Listing:
1. March For A Prophecy
2. Prism Of Memory
3. Voici L’Homme
4. A Silent Curse
5. Faith And Vision
6. Back In Light
7. Under The Tree Of Life
8. According To Darkness
9. The Hunger Theory
10. Symbolic Story 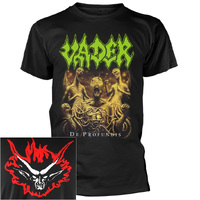