The year 2015 started more than promising for fans of high class melodic metal: SERIOUS BLACK, a so-called “allstar band” appeared on the scene and dropped their highly acclaimed debut album ‘As Daylight Breaks’. Much to the surprise of many, the band indeed proved to be a real band and they kept their promise of rocking the stages wherever possible. So during only a year they not only successfully released a fantastic debut album, but also went on extensive European tours with HammerFall and later Gamma Ray. In addition, SERIOUS BLACK was chosen to be special guest on Kamelot’s German Summer shows and also played numerous festivals in Europe. Being that active in the past 18 months, it’s surprising to see the band announcing a brand new studio album already. You’ll be even more surprise when “Mirrorworld” sees its release: SERIOUS BLACK have managed to excel their excellent debut! Prepare for something special: the “Mirrorworld” opens on September 9th 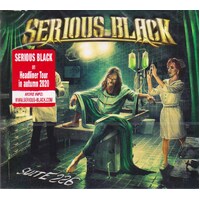