Soilwork was joined in 2005 by drummer extraordinaire Dirk Verbeuren. The ensuing full-length “Stabbing The Drama” became a landmark release, highlighted by an eighteen month world tour and a spot on Ozzfest alongside Black Sabbath, Iron Maiden, Mastodon, In Flames, Arch Enemy and The Haunted. Despite a few line-up shuffles, Soilwork and their iconic bassist Ola Flink continued to conquer fans worldwide, recording two more outstanding albums and touring relentlessly alongside
bands such as Lamb of God and Killswitch Engage. In 2013, with guitar tandem Sylvain Coudret and David Andersson on board, Soilwork unleashed their magnum opus “The Living Infinite”, the first double album in melodic death metal history. This year Soilwork will release their tenth full-length release, “The Ride Majestic”! Recorded by David Castillo (Opeth, Katatonia) and mixed/mastered by Jens Bogren (Kreator, Amon Amarth) at Fascination Street Studios, “The Ride Majestic” picks up where the band left off with “The Living Infinite” but with a slightly darker, atmospheric, and anthemic feel with interesting twists & turns!

Recommended if you like: In Flames, Arch Enemy, Dark Tranquillity, Children of Bodom, Scar Symmetry, At The Gates

Track Listing:
01. The Ride Majestic
02. Alight In The Aftermath
03. Death In General
04. Enemies In Fidelity
05. Petrichor By Sulphur
06. The Phantom
07. The Ride Majestic (Aspire Angelic)
08. Whirl Of Pain
09. All Along Echoing Paths
10. Shining Lights
11. Father And Son Watching The World Go Down
12. Of Hollow Dreams
13. Ghosts And Thunder 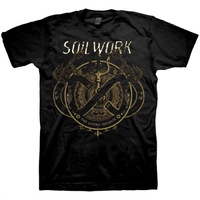