Odin is the fifth album from the German epic power metal band Wizard.


'Nobody told us that Metal was dead - believe me', Snoppi says with a deadpan face, 'we didn't notice that in the rehearsal room...'. This totally naive and very honest statement, taken from an early interview, is Wizardin a nutshell. The four guys from Bocholt started 8 years before Hammerfall (1989) and never looked back. Wizard have remained true to themselves - and they are the only real choice for anyone searching for the true Metal spirit. - 'Odin' is a powerful and versatile Power Metal epos, which starts at the point where Manowar have stopped with 'The Sign Of The Hammer'. 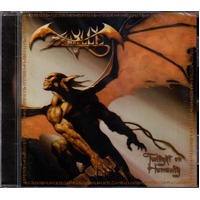